So happy to be able to share another finish. I actually finished this only about a week into the New Year, but just now got the picture taken and uploaded.

I started this one some time ago (maybe about 2 years) the pattern was from a magazine and a friend had this large hank of overdyed silk that someone had given her so she shared large amounts with several of us. The minute I saw the silk, I knew it would be perfect for this pattern, even though the magazine had shown it done in green. When I got home, I found I had this piece of overdyed linen that had purple hues over a blue gray linen. The silk also had this purple hue over a deep red or burgundy. I loved the two together and a project was born.

Although my home does not exactly have a victorian flare, I still loved the pattern, and really enjoyed stitching on this when I could. I will try to get it framed by next winter, and proudly hang it in my home regardless of the style. 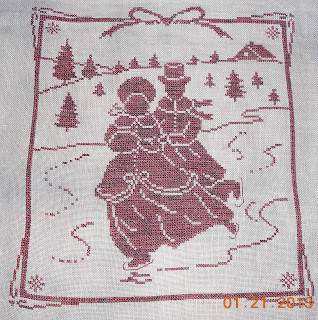 Victorian Skaters
Finished January 2013
OK, I also promised to share the few projects I am actively working on right now. I have three of them. The first is The Border Study in Red II, which is a part II of one that I finished and framed a long time ago. I've had the pattern and thread for a while, and even purchased the platinum linen that matched exactly with the Border Study I. But for some reason other projects seemed more interesting. This fall when gathering projects for a weekend gathering of stitching friends I saw this and decided it was the perfect time to get it started. Even though I had taken along a couple of smaller projects that were fun to work on, I did get this started in October, barely, just the first two bands. Once the Victorian Skaters were finished earlier this month, I began finding this to be my favorite at home project. I always love how fast an alphabet goes. I'm about a third of the way down. 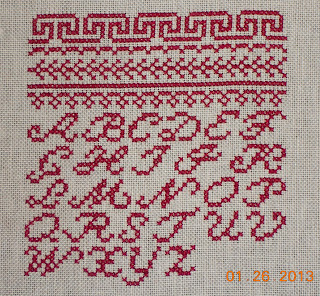 Border study in Red II
started October 2012
Next in a design from Cross Eyed Cricket (Vicki Hastings) called Harvest Sampler. It's small and easy to carry to a Tuesday evening gathering, with a few local stitchers, when I can go. I love the saying and picked up some fabric for it back in October. I think I first started it in early December, but haven't made it to stitch with the girls in a while so not much progress. Maybe I can give it a little time tomorrow. Harvest Sampler
started December 2012
The last one I have out to work on, is a pretty little, over one, sissor fob design. It's from a designer named Nancy Backus, and I think, I picked up the pattern at the 2011 Celebration of Needlework in St Louis. I found a piece of linen that I liked for it and there was enough to do the front and back designs so I started this too. It is very small and I can only see it well in the early morning when my eyes are fresh, so only a little progress on this, but I am not giving up on it. That peacock looks fun. 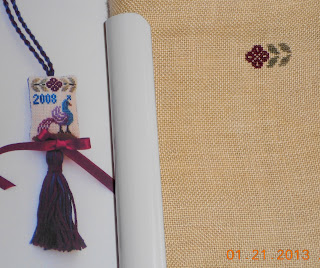 New Year and way to long for a new post

Let's try to restart this blog again. I have two new employees starting this month and I am hopeful that I will finally be able to exhale. 2012 was a whirl wind and I am looking forward to calmer and quieter 2013. Maybe even some rest and relaxation.

With rest in mind I registered today for the New England Stitching Retreats in the Shaker Great Stone Dwelling House. Since I grew up in New Hampshire and haven't been back there since I was 16, I thought I could combine a stitching retreat with a trip back to my birthplace. I'll travel up for the stitching and then rent a car for a few days of wandering through my past.

It looks like my last post was before I bought my house, a big step for someone who has been an apartment dweller for about 20 years. Three days after moving in a hail storm destroyed the roof and gutters etc. So I got a crash course on home ownership. But several months and a new roof later all is well. At least my car was safe in the garage during the storm, a luxury I never had in any of the apartments.

FYI, since we last spoke I adopted Lucky a terrier/beagle/??? mix. She was 4 1/2 years old and had never had any shots or been neutered. So we had a lot of new things to go through with her, not all great. But she has adjusted beautifully and now runs my household. I hadn't had a pet since my children were babies so this was a big transition for me.

If this all wasn't enough, right before the house, I became supervisor of the department I worked in and hired a new person, all at the same time. It has been a huge learning experience for me, and after a few ups and downs, hence the two new employees, I am beginning to get my bearings.

Enough of all that life business, lets share some stitching. Although my stitching time was limited, I did get a few things finished and a few more started. 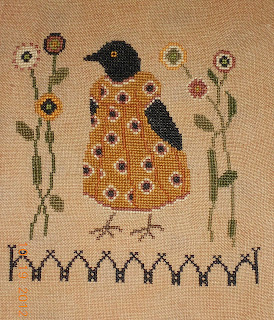 Here is Ida Mae finished but not yet framed.

Then three other small finishes 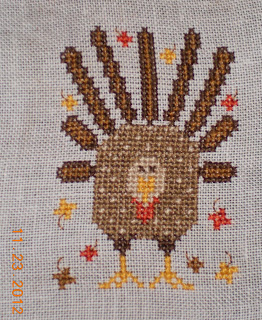 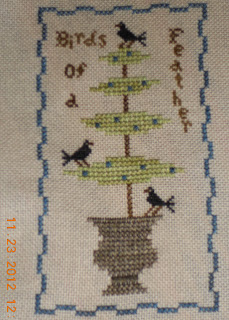 I finished another large piece but I don't have the picture in the right place so I will show you next time. I am currently working on Border Study in Red II and a couple of small projects that I will also share as we go along. I need to get a better handle on the changes in Blogger for the pictures, these took forever to get on here and they look terrible.

Good to be back. Talk to you again soon. CJ in OK

CJ in OK ;-)
First stitching project finished in 1978 so you do the math. Two kids (adults) one DGD. Work fulltime to maintain an appropriate cross stitch stash, which leaves only part time to stitch, but I make do.